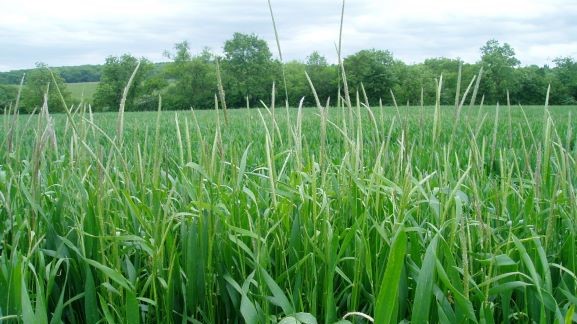 Blackgrass (Alopecurus myosuroides) resistance has plagued cereal growing in Northern Europe since the early 1980s.  In the UK it is reckoned that resistant populations exist on virtually all farms where any blackgrass herbicide has been used regularly.  Usually, these populations will have resistance to more than one mode of action. (AHDB, 2014).

Blackgrass is very aggressive.  Although individual plants have narrow, slender leaves compared to wheat or barley, they tiller vigorously, grow higher than the crop and may produce 1000 tiny seeds.  As few as five plants per square metre will reduce yield and ten will make successful cereal growing impossible (Impey, 2014).

The blackgrass problem has two main roots (Moss, 2017).  First, the trend for winter cereals to be planted earlier.  In the 1970s, only 5% of the UK wheat crop was drilled in September; today the figure is around 60%.  Oilseed rape is another winter crop drilled early.  As blackgrass germinates between August and October, much less is now controlled by seedbed preparations.  The second factor is the move away from ploughing to shallow, minimal cultivations.  Blackgrass seed will not germinate if buried deeper than 5 cm, and the viability declines by about 75% per annum.

Once, the solution was easy: spray PSII inhibitor herbicides like isoproturon pre-emergence in wheat and ACC-ase inhibitors like fluazifop-p-butyl post-emergenece in oilseed rape.   However, a much larger population of blackgrass has meant more opportunity for mutations conferring resistance to herbicides to evolve and establish.

Resistance to these herbicide chemistries has been common since the 1980s.  More recently, prosulfocarb, an old active ingredient with a mode of action not previously used in cereals gained approval for use, albeit being used at very high rates.  In 2011, prosulfocarb resistant blackgrass was recorded.

Furthermore, since seed production is so prolific, around 97% blackgrass control is needed just to contain the problem.  In the absence of effective herbicides, an integrated weed management approach is recommended.  This includes using crop rotations, occasional ploughing to bury seeds, using high crop seed rates and delayed drilling.  However, effective new blackgrass herbicides with novel modes of action are going to be needed to reach such a demanding level of control.

AHDB (2014).  Agriculture and Horticulture Development Board Information Sheet 30.  Blackgrass:  solutions to the problem

Borel, B (2018). Are weeds winning the war against herbicide resistance? Scientific American, 18 June 2018.

Moss, S (2017).  Black-grass (Alopecurus myosuroides): why has this weed become such a problem in Western Europe and what are the solutions?  Outlooks on Pest Management, October 2017 pp 207